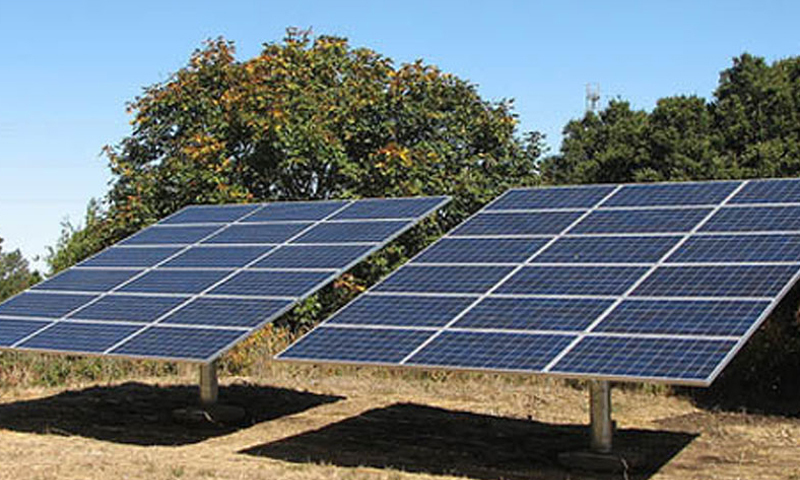 India has recommended imposing a 25 percent safeguard duty on solar cells from China and Malaysia, saying the overseas supplies have caused or threatened “serious injury” to domestic manufacturers.

Under the proposed plan, the safeguard duty would be applicable for two years, India’s Directorate General of Trade Remedies, a unit of the commerce ministry, said in the conclusion of its findings posted on its website Monday. The tariff would be lowered to 20 percent for the first half of the second year and to 15 percent by the second half. The recommendations need the finance ministry’s approval before they take effect.
“Imposition of safeguard duty in this case would be in public interest because it will prevent complete erosion of manufacturing base of solar industry in the country,” the DGTR said in the recommendation.
India, the largest importer of Chinese solar equipment, first proposed a 70 percent safeguard duty in January to protect its local industry. Solar project developers, who rely on overseas components, have countered that the move would jeopardize the nation’s plans to boost its use of renewable energy.

The Ministry of New & Renewable Energy estimated last year that depending on India’s annual solar cell manufacturing capacity of 3 gigawatts alone means the country can only meet 15 percent of its annual installation target of 20 gigawatts.

The safeguard duty makes sense only if the domestic industry is able to match cheap imports within the two years, according to Anish De, the head of infrastructure strategy and operations at consulting firm KPMG.

“As long as that is possible, the safeguard duty would be justified,” he said. “The hope is that soon the domestic industry will scale up and bring down the cost differential.”

Cheap imports have pushed down tariffs for solar power to record lows, taking the country closer to meeting Prime Minister Narendra Modi’s ambitious plan of installing 175 gigawatts of renewable capacity by 2022. Bloomberg New Energy Finance expects module prices to drop 34 percent this year and as much as 15 percent in 2019 after China shifted its policy on solar power last month.

“The order, if implemented, will damage both Indian buyers, who pay most of the duties, and Chinese producers” for whom demand may weaken, according to Zhang Sen, secretary-general of the photovoltaic production unit at China Chamber of Commerce for Import and Export of Machinery and Electronic Products. However, there’s still room for negotiations before India’s finance ministry accepts the order, said Zhang.

The safeguard duty could push up tariffs for the 60 gigawatts of solar capacity that the government plans to auction over the next two years, said Azure Power Global Ltd. Chairman Inderpreet Wadhwa.

“Manufacturing tenders are a more vibrant way to create impetus for domestic manufacturing rather than increasing the cost of energy for the public at large,” Wadhwa said. Duties “may not be the most economical thing to do” from a public interest perspective.

Solar tariffs in India matched a record low of 2.44 rupees a kilowatt-hour in the country’s largest federal auction earlier this month. The tariffs will go up to 3.1 rupees a kilowatt-hour and generators will pass it on to power retailers, according to Sunil Jain, the chief executive officer of Hero Future Energies Ltd., a company backed by International Finance Corp.