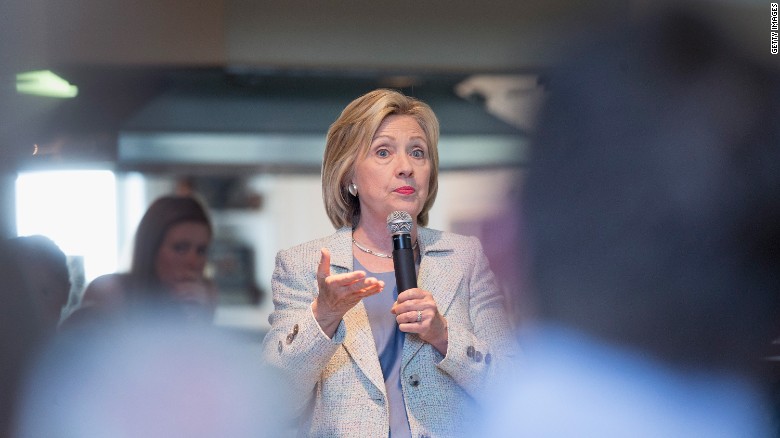 Des Moines, Iowa (CNN)Hillary Clinton pledged Sunday that as president she would put the United States on a path toward generating enough renewable energy to power every home in the country by 2027 – ten years after she would hypothetically take office.

In a video posted to her campaign website, Clinton knocked Republicans for refusing “to accept the settled science of climate change” and cast her push as a fight for children and grandchildren.

“I am just a grandmother with two eyes and a brain and I know what is happening in the world is going to have a big effect on my daughter and especially my granddaughters,” Clinton said, using a line she often delivers at campaign events. “You don’t have to be a scientist to take on this urgent challenge that threatens us all. You just have to be willing to act.”

The video – titled “Stand for Reality” – featured a slate of quotes from Republicans on climate change, including when former Florida Gov. Jeb Bush told Esquire Magazine in 2009, “I’m a skeptic. I’m not a scientist.” The slate also included quotes from Sens. Marco Rubio, Ted Cruz and Rand Paul.

“You don’t have to be a scientist to accept scientific evidence,” Clinton tweeted. “Climate change is real and we must act. -H.”

Clinton’s plan focuses largely on residential power usage and is buoyed by a focus on solar. By the end of her hypothetical first term as president, Clinton promised that the United States would have more than 500 million solar panels installed across the country.

“The decisions we make in the next decade can make all of this possible. Or, they can keep us trapped in the past,” Clinton says in the video. “We cannot wait any longer. It is time we stand for healthier climate, stand for cleaner air, for science, for innovation, for our children. For reality, for the future.”

The former secretary of state’s clean energy pitch comes at a time where many Democrats are focused on climate change, particularly the need to decrease the use of fossil fuels. According to the World Bank, over 85% of U.S. energy consumption came from fossil fuels.

Clinton was confronted by climate change protestors at a town hall earlier this month in New Hampshire. The former secretary of state was first asked a “yes or no” question about banning the extraction of fossil fuels from public grounds. Clinton did not give the protestors the answer they wanted, telling them she would not ban the practice until alternatives were in place.

According to the fact sheet, Clinton does not rule out using federal land for fossil fuel development, but says that she would ensure “taxpayers get a fair deal for development on public lands, and that areas that are too sensitive for energy production are taken off the table.”

Some of Clinton’s top supporters have also been outspoken on the need for 2016 Democrats to tackle climate change.

Tom Steyer, a hedge fund billionaire and the head of Next Generation, a non-profit focused on climate change, issued an open letter on Friday that called for all 2016 Democrats to “lay out a clear and concrete plan to achieve at least 50 percent clean or carbon-free energy by 2030.”

“Whether or not candidates make this commitment will be a critical factor for Americans who are deciding what candidates to support at polls,” wrote Steyer, who has already hosted a fundraiser for Clinton at his home in California.

Clinton’s campaign claimed Sunday that their plan matches the Steyer pledge, but a supportive statement from the environmentalist did not outright say Clinton’s plan met his standards.

He did call the plan “an ambitious framework to put our nation on a path to a clean energy economy,” adding that Clinton “emerged as a strong leader in solving the climate crisis and ensuring our country’s economic security” due to the proposal.

Campaign aides stressed that Sunday’s announcement was their opening salvo, not their entire clean energy platform, and Clinton herself said in the video that she will lay out her entire platform “over the next few months.”

But other 2016 Democrats were quick to pounce on Clinton’s proposal.

In a memo titled, “What Real Climate Leadership Looks Like,” Lis Smith, Martin O’Malley’s deputy campaign manager, stressed that the former Maryland governor outlined his clean energy plan last month and has backed up his plan with “action, not just words.”

“Eschewing the piecemeal, poll-tested ‘all of the above’ energy strategies of the past, O’Malley has made clear that he will use the full force of his executive power to make the transition to a clean energy future the number one priority of our federal government,” Smith wrote.

Despite the critics, Clinton’s plans was met with warm regard from environmental groups.

Tiernan Sittenfeld, an executive for the League of Conservation Voters Action Fund, called Clinton’s video “spot on” and said it proved Clinton “will make it a top priority throughout her campaign.”

Very nice article and straight to the point. I don’t know if this is truly the best place to ask but do you people have any thoughts on where to employ some professional writers? Thank you 🙂